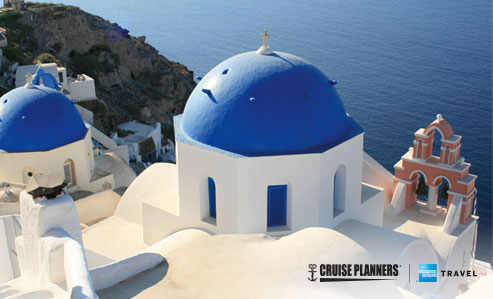 This time last year, I walked into the New York Times Travel Show with the intention of building up readership for this blog, and maybe learn a thing or two about places I haven’t been.  I never dreamed I would walk out on the path to being a Cruise Planners franchise owner.  Within six weeks of the show, I completely reinvented myself as a business owner.

I love to travel.  There are a million reasons I could list; the sights, the sounds, the people, new experiences, we know them all.  Perhaps my favorite are the smells.  Every different location has it’s own unique scent.  It comes from the geology, the ecology, the people, the food, the culture –  it hits as soon as you get off the plane, or maybe later while sitting at a street-side restaurant, or strolling through a park.  It becomes ingrained in memory, and you never know when you’ll be reminded again.

I bought the Cruise Planners franchise for my love of travel.  “Great, I own a Travel Agency.  I’ll be able to travel the world now!”  They sold me a dream, but I bought a business.  I’ve been sitting at my desk for the better part of a year planning other’s great adventures.  I’ve hardly stepped outside.

But the year was good.  We’ve sent or booked clients to France and Italy, Iceland, Mexico, Tahiti, Hawaii, and the Caribbean.  We have a couple spending a week at an over-water bungalow in Jamaica, and another spending a night in Bora Bora.  Now it’s time to wipe the dust off the luggage. 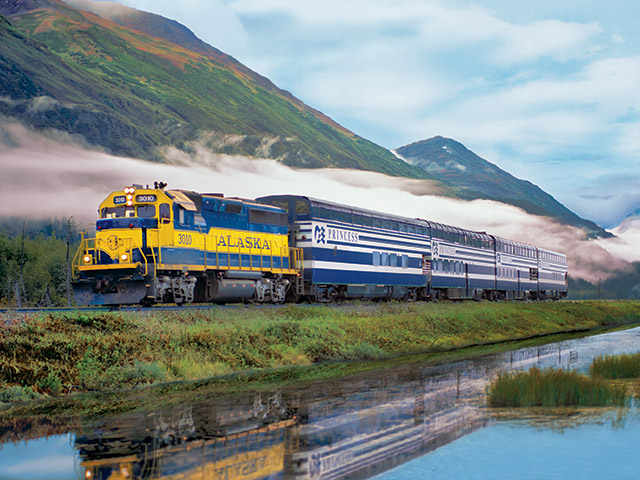 Our travel itinerary for 2017 (and yes, you can expect a blog on each one):

It looks like the old shoe maker just got a new pair of soles!  Enjoy The Journey…

Mexico.  Is it the image of a barren wasteland of adobe huts and sombrero wearing banditos on permanent siesta, only waking occasionally for a slug of dirty tequila?  Or is it Mexico City, that smog infested, over-populated urban center, littered with stolen cars and orphans playing on landfills?  Is it the Drug Cartel controlled border towns, teeming with illegals jumping the fence?  Is it Tijuana, with it’s sidewalk pharmacies and bestiality shows?  What is it that makes you so God-Damned scared of Mexico? 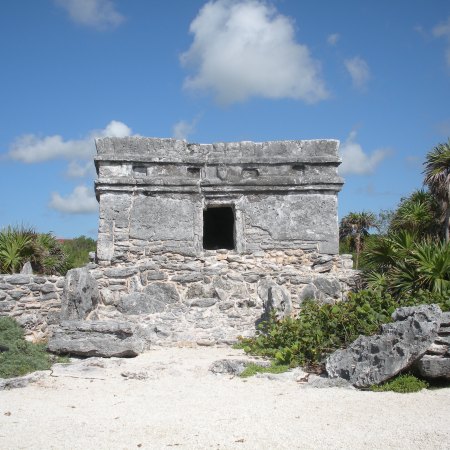 Is it because they’re below us and it’s super hot?  Does it actually remind people of Hell?   America as the promised land and Mexico as purgatory for the damned.   I mean, shit, I know tons of bad-ass, tough New Yorkers that crap themselves when they hear “Mexico”.   Oh, the murder rates?  You’re five times more likely to get whacked virtually anywhere in the States than you are in a Mexican resort area.  Check the numbers yourself.

So here’s the deal, don’t go looking for trouble, and trouble won’t find you.  Sure, there are troubles, big troubles, along the border towns and Central Mexico.  But it’s nearly 100% drug related.  Eliminate the drug cartel issues and you have one cool country rich in history and culture. 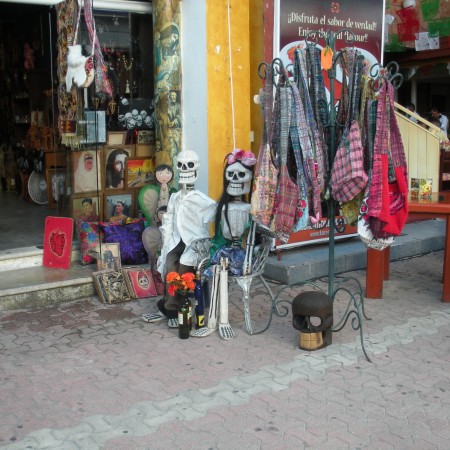 The Yucatan Peninsula is the south-eastern region of Mexico that runs along the western portion of the Caribbean Sea.  Cancun, Riviera Maya, and Tulum belong to this region.  This has got to be one of the most magnificent coastlines in the world.  I visited Playa Del Carmen, in the heart of Riviera Maya, in September, 2012.   I wanted to know what everyone is so afraid of. 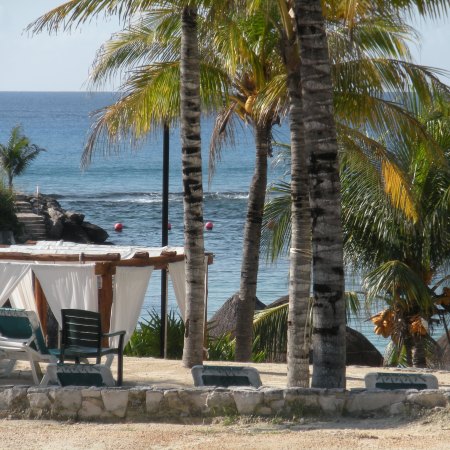 The drive from Cancun is just over an hour.  In this time we saw 3 stop points along the highway manned by Mexican Federales.   Military men, dressed completely in black, with flak jackets, riot helmets, machine guns and all sorts of other heavy artillery man the check points.  They let us proceed in our van, barely slowing down.  The second stop point was less intimidating,  more interesting.  By the third sighting I realized these guys are actually just here to protect me.  Any other time I saw them during our trip there was a general feeling of security.  Never once during my time in Mexico did I feel anything less than perfectly safe.

Our drive brought us to the Occidental Grand Xcaret Royal Club.  The hotel has an open air lobby with a truly grand thatched roof.   The only thing warmer than the welcome was the temperature.  Quite frankly, it was hotter than hell. 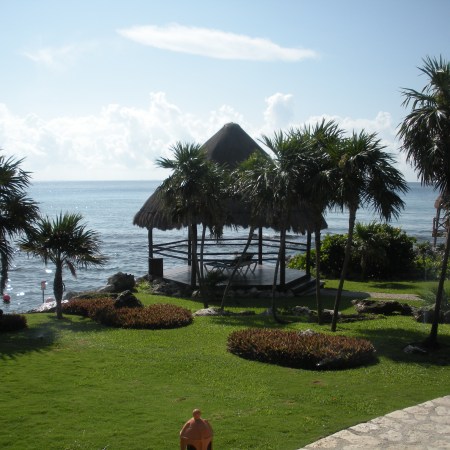 At 3:00 in the afternoon, midway through our vacation, we were sitting in a pool.  No matter how many frozen margaritas I tried to wash down, nothing beat the heat.  It was so hot, it felt like the pool water was about to boil over.  Feeling drained and nauseous, we looked at each other, and decided it was time to go inside somewhere and find air conditioning.  It was just too hot in the pool.  Of course, it didn’t help that I outdrank a Scotsman at the swim-up bar the night before.  Tequila, ugh, it’ll be the death of me someday.

Quinta Avenida is 5th Avenue, Playa Del Carmen, and only a short taxi from our hotel.  Lined with hundreds of shops, bars, and restaurants, it’s the main tourist hub in the region.  If you look hard enough, and the locals trust you, anything you think of can be found here.  I was offered prescriptions, weed, heroin, tattoos, and women.  One guy even tried to pawn his sister off on me.  I couldn’t help but wonder how many American fugitives are holed up here.  But again, I never felt in danger. 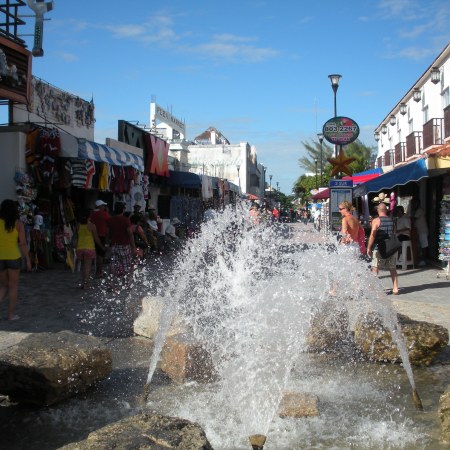 Except for the few trips into Playa, most of our dining was at the resort.   Every meal had leftover rice and beans and some sort of mystery meat.  Over-cooked and over-seasoned, we laughed as we tried to figure out what kind of animal our dinner came from.  Much of the food was mostly inedible, but we found enough that was palatable to keep us largely satisfied.

On our last full day we needed to arrange transportation back to the airport.  After asking our concierge to please make arrangements, she got back to us and said, “I’m sorry, JetBlue is no longer in business.”

“Yes, their phone number is no longer operating.  I’m afraid you will have to make arrangements through our own transportation company.”  I nearly fell over laughing.  This was one of the more creative, yet so simple, scams, that has ever been tried on me.  Miraculously, our transfer to the airport was arranged through JetBlue about 2 minutes later, but not without a few more laughs.

So in the end, I was not sucked into the bowels of Hell or kidnapped by a gang of banditos.  I met some great people, ate some terrible food, drank good tequila, saw some cool stuff, brushed up on my Spanish, and walked away a better person for it.  Mexico, you don’t scare me.  See you again, someday. 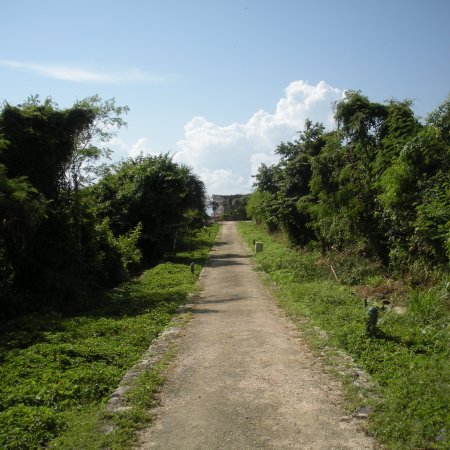